When we arrive in Detroit, it is at once beautiful and dilapidated, bustling and devoid. The Detroit Institute of Arts building, an apartment building on East Kirby Street, the Woodward Avenue Presbyterian Church—they’re historical landmarks that have managed to stay current, stay open, stay inhabited. But there’s an emptiness that surrounds them. Buildings on the skyline are hollow; the memories of what once filled them fading. Woodward Avenue seems oddly wide for the number of cars traversing it. It was built for a time of more traffic.

Detroit isn’t the first city most people would think of as a candidate for developing a climate adaptation plan. Earlier this summer, the city declared bankruptcy and appointed an emergency manager to dig them out of an $18 billion hole. Forty percent of streetlights are out in the city, homicides are on the rise, and arson is rampant. Once the epicenter of American manufacturing and mobility, there are now 78,000 abandoned buildings in the Motor City.

So, when it comes to addressing Detroit’s many woes, climate change doesn’t top everyone’s list of priorities. But the Detroit Climate Action Collaborative (DCAC), a coalition of more than a dozen non-profit organizations, businesses, and academic institutions, is working on a different time horizon.

“If you want to look at murder rates or darkened streets or slow fire response, those are all extremely important issues,” Guy Williams, the president of Detroiters Working for Environmental Justice (DWEJ), a part of the DCAC, said. “But I believe we need to work on more than one issue at once. If we wait until we resolve all these other issues  before we start working on climate change, it’s going to be way too late. On the scale of problems, climate change may be slow-moving, but we know it’s big and powerful in the long-term.”

Heat and storms hit the most vulnerable

Williams recognizes that the impacts of climate change—which in Detroit will be primarily more intense storms and extreme heat—will sting worse in an ill-prepared city. The city’s outdated stormwater infrastructure is already failing in the face of changing precipitation patterns.

In 2011, the wettest year on record for Detroit, the city’s sewer system was overwhelmed and discharged 26 billion gallons of undertreated sewage into the Detroit and Rouge Rivers. Many Detroiters don’t have air conditioning, and, though the city does open cooling centers during heat waves, a sluggish and unreliable public transportation system makes it difficult for some residents to find public AC. Hot temperatures also exacerbate air pollution.

Detroiters bear a disproportionate burden of Michigan’s pollution. Here, a scene from the most polluted zip code in the state: 48217

For DWEJ, the connection between climate change impacts and the organization’s environmental justice mission is clear. Detroit is 88 percent people of color in the context of a state that is 79 percent white, and 36 percent of the city’s population live below the poverty line—that’s twice the state average. So the fact that five of Michigan’s 25 most polluted zip codes are in Detroit and that the rate of hospitalization for asthma is three times higher than the rest of the state are signs that this majority-black, low-income city inhales a lopsided portion of Michigan’s pollution. Climate change will be no different: its burdens will fall most heavily on those least equipped to cope.

“Climate change is this big, cross-cutting issue that affects poor people and black people and all people of color disproportionately,” Williams said.

Spurred by wake-up-call events like Hurricane Sandy, many cities are now developing climate action plans that—like Detroit’s—lay out strategies for both reducing greenhouse gas emissions and enhancing the resiliency of infrastructure and institutions. However, as a non-governmental, grassroots climate action collaborative, the DCAC is unique—most climate plans are created and implemented by governments.

On one level, planning for the impacts of climate change within city government makes sense, since cities have powers that civic organizations and the private sector do not. City agencies can, for instance, adjust building codes to account for flood impacts, zone new construction according to expected sea level rise, and provide emergency response during extreme weather events. But in a city that just declared bankruptcy, the line between public and private responsibility blurred a long time ago, and many Detroiters have realized that—when it comes to charting a future for their city—it’s really anyone’s ballgame.

“Of course it depends on the city. But in a city like Detroit where people are hurting and mistrust in the government can be high, grassroots works because it builds local ownership into the plan,” said Melinda Koslow, a DCAC leader who manages the Great Lakes Climate Change Adaptation Program at the National Wildlife Federation. “Plus, in order to make a plan implementable, there is really no other way to do it in Detroit. The government has a lot of pressing demands that often overshadow anything considered ‘extra.’ Residents have the local knowledge to make this climate plan work for them.”

From a motley crew, a common vision

No blueprint existed for a community-based, city-wide climate action plan, but in 2011, DWEJ started pulling together leaders from diverse public and private institutions—from the Detroit Salt Company to the National Wildlife Federation to the US Green Building Council to the WARM Training Center for green jobs—to form the DCAC. Drawing inspiration from PlaNYC as well as Chicago’s and Pittsburgh’s climate action plans, the coalition then divided into workgroups focused on different issues such as public health, transportation, solid waste, energy, and parks & public space. The groups meet monthly to exchange ideas and work on the framework that they’ll present to each other when the entire coalition comes together this October. 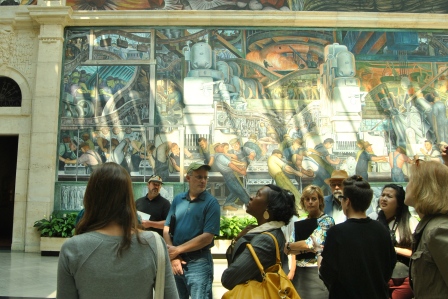 Kimberly Hill Knott (looking up), the convener of the DCAC, with colleagues in the Diego Rivera room at the Detroit Institute of Art

“We believe that addressing climate change is very timely and that there are many co-benefits,” Kimberly Hill Knott, Director of Policy at DWEJ and Project Director of the Detroit Climate Action Collaborative (DCAC), said. (Knott is also recent recipient of the White House’s Champions of Change award.) “Whenever there is great challenge, there is also great opportunity.”

The DCAC is partnering with academic institutions like the University of Michigan and Wayne State University to complete some of the research that will inform the plan, like a greenhouse gas inventory and a climate vulnerability assessment for the city. The coalition has so far held four focus groups with Detroit residents to listen to their concerns and hopes, and they will soon launch a more aggressive community engagement campaign.

Though Knott said it was too early to share the specific findings of the workgroups, there are a few areas that seem like obvious targets for action: Almost half of the city’s land is impervious, not letting water filter into the ground; installing more porous pavement and green space would both improve quality of life and reduce stormwater runoff.

The city lost 50,000 trees between 1950 and 1980 due to Dutch elm disease and neglect; rebuilding urban tree canopy could cool down city blocks while increasing home values and decreasing crime. Many Detroit homes are so poorly insulated that residents spend twice as much of their annual income on energy as the rest of Michigan; weatherizing buildings and installing more energy-efficient systems would reduce greenhouse gas emissions, make homes more resilient to storms, and free up money for other projects.

“If someone is not paying 25 percent of their income on energy, then they can pay their tax bill,” Kevin McNeely, a leader in Detroit’s chapter of the U.S. Green Building Council and an active member of the DCAC, said.

All of these examples are win-win-wins, and many organizations in Detroit are working towards them already. The DCAC is also looking further down the road toward Detroit’s foretold comeback, and that’s where they think the City has one opportunity most others don’t have. Though populations are still declining, fewer people are moving out of Detroit, and demographers expect the city’s population to stabilize between 650,000 and 700,000 residents—with young professionals now ‘flocking’ to the city. 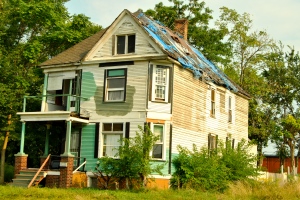 Challenge or opportunity? Some new Detroiters are seeing a little bit of both

If Detroit can prepare for climate change as more people start moving in, the City can get ahead of the problem. Instead of having to move people out of floodplains—a tough decision other cities are considering today—Detroit can steer new development away from floodplains to begin with.

“Detroit is poised to be an example of what socially just and ecologically sustainable development can look like,” Leila Mekias, and intern at DWEJ, said.

What will become of all of this brainstorming when the climate action plan is completed towards the end of 2015? Critics fear that, since the DCAC is a grassroots effort, its vision will be unmandated and infeasible. Williams admits that the project is risky—it’s big and ambitious. The DCAC hasn’t secured a lot of funding yet, or a commitment from the City to implement the plan.

But the DCAC sees their position outside of government as an advantage, and they believe the process of creating a climate action plan is just as important as the product. Knott is working hard to build relationships and keep city officials informed about their progress. She and Mekias had a preliminary meeting with the Mayor’s Office this August, and a member of Detroit’s Buildings, Safety Engineering & Environmental Department sits on DCAC’s Steering Committee.

Knott says that the sheer number and variety of stakeholders involved in the coalition is already turning heads, both locally and nationally—people see that the DCAC has been able to convene diverse organizations in the city in a way that few processes have. When the DCAC does come to consensus and make policy recommendations, Knott is confident they’ll have an engaged audience.

“When we’re ready to write legislation or an ordinance, the necessary people will have been part of shaping the framework all along,” she said.

Adaptation against all odds

Through the DCAC, Detroit is attempting to defy the notion that preparing for the impacts of climate change is a luxury—something that only cities with plentiful resources and strong government agencies can do. In fact, they say that it is in the poorest, most problem-plagued cities where climate action is both the most urgent and the most transformative.

“I really believe that DCAC is going to be a project that other cities learn from. There are international eyes on Detroit,” Knott said. “If we can do a climate action plan in this city, anyone can.”

3 thoughts on “A Climate Adaptation Plan in the Unlikeliest City”