How did you come up with the idea for the Great American Adaptation Road Trip?

The idea developed over the course of a year and went through many iterations. As graduate students at the University of Michigan’s School of Natural Resources and Environment, we both studied Environmental Policy and had the opportunity to take courses with Rosina Bierbaum, a climate leader and a member of President Obama’s Council of Advisors on Science and Technology. We learned that, though the United States has been slow to address climate change at the national level, many new policies and technologies are being considered in towns, cities, and states–from the ground up. We were interested in seeing this innovation at play on the local level and making the idea of ‘climate change adaptation’ accessible to people through storytelling. A road trip seemed like a great way to accomplish both of these goals. And to have some fun.

Who is funding you?

We received funding from a variety of sources: an anonymous donor interested in scientific storytelling, the Alumni Office at our graduate program (we met with many alums around the country doing vital work), and people who made small donations through a crowdfunding campaign (those donors received postcards from the road).

What is ‘climate change adaptation’?

When we say ‘climate change adaptation’ we mean that, in order to minimize the damage and optimize the opportunities of a warming climate, we need to adapt. Climate change adaptation is about transitioning to a more sustainable society, not just for our kids and grandkids, but for people alive now. It’s also about building more resilient communities and institutions so that fewer people get hurt by extreme weather events, such as hurricanes, floods, and droughts, that are becoming more intense and more frequent with climate change.

What kind of information on climate change adaptation is already out there?

Adaptation planning is currently occurring in the United States at various levels of government and in many sectors, and several institutions like the United States Global Chance Research Program, the Georgetown Climate Center, and EcoAdapt are helping to document them. However, a significant number of implementation activities are not documented and information-sharing among groups is limited. In many cases, climate adaptation actions are not recognized as such, as they are folded into existing, dynamic social, economic, and political processes. Though recent images of inundation in New York and New Jersey, Colorado wildfires, and Midwestern drought have given Americans an idea of what climate change looks like, climate change adaptation is more difficult to picture. It exists in the pages of academic studies, in the minds of city planners, in grant applications and insurance claims, but rarely on the front page—or even in the average American’s imagination. Which brings us to the next question…

Why the storytelling approach?

Experts in communication have shown that people are drawn to stories. Facts, figures, and flowcharts are all important—and we will certainly include a sprinkling of them on our blog—but conveying information about a sense of place and community, cultural history, loss of livelihoods, and neighborly kindness through narratives appeals to peoples’ values and emotions, which is the best way to capture peoples’ attention and begin a productive conversation.

How did you decide where to go, and who to interview?

Before starting the trip, we did a lot of research in order to plan our route. Resources from the Georgetown Climate Center, the Climate Adaptation Knowledge Exchange (CAKE), and ICLEI Local Governments for Sustainability gave us ideas. We wanted to go to some of the iconic places for climate change impacts–the bayou in Louisiana, for instance, which is experiencing rapid land loss, and Glacier National Park in Montana, where the park’s namesakes are quickly melting away. We also wanted to visit places that were experiencing different climate impacts–from sea level rise on the coasts to forest fire in the mountains to dropping lake levels in the Great Lakes–and preparing in different ways. Though we had a rough route planned out before we started the trip, as we actually began meeting with folks around the country, our ideas for ‘adaptation stories’ and our contacts snowballed.

As for our interviewees, we tried to talk with people working on climate change adaptation from various angles. We met with individuals from city governments, non-profit organizations, for-profit companies, and academic institutions. We generally contacted people a few days to two weeks in advance to let them know we were coming, but some of our interviews happened spontaneously–in a farmer’s field or in an office when we dropped by. Some of our interviewees actually found us through our blog and invited us to document a project in their place.

What about the carbon emissions from your minivan?

Part of the reason we’re so interested in climate adaptation is because we know that it will entail building a new clean transportation system based on efficiency and renewable energy–a very exciting transition. Unfortunately, we as a society are not quite there yet, and it is difficult to get to all of the nooks and crannies of our country without driving, especially in our three-month timeframe. To mitigate the climate impact of our trip, we purchased 10.34 metric tons (23,000 lbs) of carbon credits from Terrapass. Using the Terrapass carbon calculator, we estimated our emissions from driving, flying, and the energy in the homes and hotels we stay in along the way. These offsets were sourced from carbon reduction projects in the United States–projects such as abated agricultural methane. 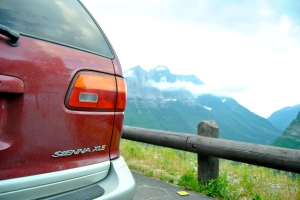 It’s not either-or. We can work on mitigating greenhouse gas emissions while adapting to the unavoidable impacts of climate change at the same time. In fact, we must work towards both goals at once. As Al Gore put it in 2008: “I used to think adaptation subtracted from our efforts on prevention. But I’ve changed my mind.” The World Bank’s Turn Down the Heat report shows that we are currently on the emissions pathway to a 4-degree Celsius global average temperature increase by the end of this century. We must change course. But we also must come to terms with the fact that a 2-degree Celsius temperature rise may already be locked in, and with it impacts such as one to two meters of sea level rise, more intense storms and heat waves, shifting agricultural zones, and other impacts are unavoidable. Preparing for these impacts now will save lives and money down the line.

We found many examples of projects that simultaneously reduce vulnerability to climate impacts and reduce carbon emissions–win-wins. Companies and cities that recognize the need to plan for and adapt to climate change impacts almost always recognize the joint need to reduce their contribution to the problem. Rather than viewing adaptation as ‘giving up’, we see the fact that people are already experiencing impacts from a warming world and having to make changes–and sometimes very tough choices–as a result as a resounding call for action on curbing greenhouse gas emissions.

What is your favorite place that you visited?

You know we can’t answer that!

Who is the better driver: Allie or Kirsten?

When she was 15, Allie ran over a small tree in a parking lot when practicing U-turns. And Kirsten backed into a lone parked car in a large parking lot three days after she got her driver’s license. Thankfully, our driving skills have improved exponentially since we graduated from parking lot driving in the mid-90s. In fact, we drove an entire 17,358 miles without so much as a speeding ticket!

What did you listen to in the minivan?

A lot of This American Life, The Moth, and TED Talks. Many friends we stayed with around the country made us CDs that we kept on repeat. Songza was a godsend. And occasionally we listened to each other.

Didn’t you two get sick of each other?

Only sometimes, because we were on a mission! More often, this happened:

We don’t know what else to be. We–as a planet–are in quite a pickle, but we met so many passionate, resourceful people this summer who are working hard to create change. The opposite of hope is paralysis. The only direction to move is forward.

Have a question we didn’t answer? Email us at adaptationstories at gmail dot com