Glenn Austin started farming on his family’s organic dairy and tobacco farm in Tennessee at the ripe age of five. As a young man, he worked for Monsanto, but after several years Austin decided petrochemical fertilizers weren’t for him, so he and his wife made the move from Tennessee to the Western Slopes of Colorado’s Rocky Mountains to plant a sustainable orchard. This year he turns 70 and marks his 43rd year farming in Paonia. When we hopped on Austin’s golf cart to tour his family farm, which sits high on a mesa in the North Fork Valley, things were in full swing. 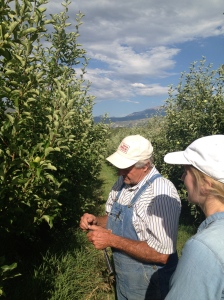 At Austin Family Farm, Austin, his wife, their children and children’s spouses, and several grandkids grow 11 varieties of peaches, 7 types of cherries, and 15 kinds of apples, four of which Austin created himself. Grapes, apricots, raspberries, blackberries, honeybees, cattle, and a few other treasures also speckle the farm’s fields.

When we asked how he decides what to grow, Austin explained, “My first objective in picking varieties is: how frost-resistant are they? It don’t matter what they taste like or what they look like if you don’t have any.”

Unfortunately, this year it didn’t matter how frost-hearty the cherries and apricots were—nothing could save them from the brutal cold snap that hit on April 8, right when the buds were at their most vulnerable stage. Not a single farmer that we spoke with from the valley to the mesa was able to save their cherry crop this year, no matter how many old-timer or new-fangled techniques they tried.

“The temperature dropped to 9 degrees [Fahrenheit] on the mesa,” Austin said. “The tree buds can withstand maybe three hours at 28 degrees, but that’s it. They didn’t stand a chance this year.

Despite Mother Nature’s omnipotent hand, there are a few things local farmers do to trick Her when a cold snap comes. Some use wind machines—elevated electric blades that rotate, mixing the warmer air that hovers above the treetops with the cold air closer to the ground. Under the right circumstances, a wind machine can increase the air temperature around the trees by up to half the temperature difference.

One of many wind machines at Ela Family Farms

The technology appeared after World War II and is now adopted widely on the Western Slopes. Lately, even more farmers are seeing a reason to invest. Bradley just bought a new wind machine for his orchard with extra cash from last year’s harvest. Though the machine didn’t save his cherries this year, he says if it saves even one future cherry crop, it would pay off the $32,000 bill.

“A quarter degree can be the difference between a crop and no crop,” said Austin.

That’s why Steve Ela of Ela Family Farms in Hotchkiss sleeps with a temperature alarm clock next to his bed. As soon as the temperature nears 32˚F—give or take a degree depending on the dewpoint—Ela gets up to power on his wind machines. Though the machines come built with automatic start technology, he sleeps better at night if he wakes up to start them himself at 3 a.m.

Back up on the mesa, Austin has a couple extra tricks up his sleeve. Every year he piles the prunings from his fields around the perimeter of the orchard, waiting for the perfect chilly night to light them. Like Ela, he monitors the temperature on the mesa closely, waiting for a freeze. If buds are out when the temperature drops, he turns the orchard edges into a bonfire to keep the precious trees warm. 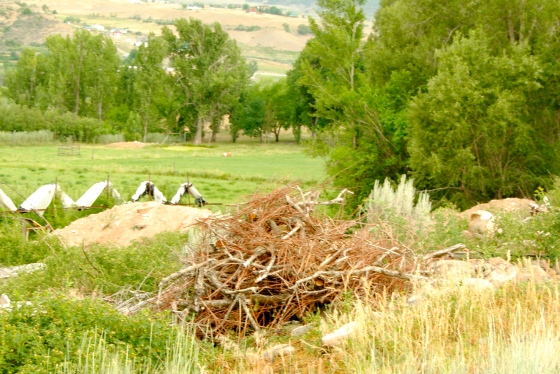 A pile of prunings at Austin Family Farms

“I only have so much fuel. The tricky part is deciding, do I light it tonight? Or another night?” Austin told us. The decision, it seems, involves a little science and a lot of gut.

Some farmers burn smoky fires in ‘smudge pots’ under the trees to keep them warm. These old smudge pots are no longer used at Ela Family Farms.

Some veteran farmers coat their buds and blossoms in ice to protect them from frost—a counterintuitive approach. But sure enough, when water droplets from the sprinklers freeze, they release a tiny bit of heat energy onto the buds. By continually watering the buds, the ice-making process actually keeps the buds insulated and alive. But, according to Austin, you can’t stop watering until the temperature gets above freezing. The problem with the ice approach, he says, is that the cold snaps happen during times of year when water is especially scarce and expensive.

Perhaps the most basic strategy farmers use to ensure they get a good yield is diversification.

“We try to have fruit to harvest from June through November,” Austin told us, gesturing to the myriad fruit varieties he grows on his 26-acre property, all of which ripen at different times.

Austin, Ela, and Bradley all plant numerous varieties that bloom and fruit throughout the growing season. If a frost kills the apricots and cherries, it might not hurt the peach and nectarine trees that bloom a little later. If it’s a bad year all around for the fruit trees, then Austin’s family falls back on the grandsons’ honey business, their cattle, and their federal crop insurance. In fact, farmers have factored the unpredictable tendencies of Mother Nature into their calculations for years, expecting to lose a crop every now and then.

According to Dr. Ron Godin, an agronomist with the Colorado State University Agriculture Extension office in Delta, the growing season has lengthened, which may be connected to climate change. Godin looked at the growing season in Hotchkiss over the past 30 years and noticed something intriguing. A few decades ago, the trees used to start ‘moving’ in mid-March—meaning the sap started flowing, an indication that the trees were waking up after their winter hibernation. In the last decade, Godin noticed, not only did the fruit trees start moving at the beginning of March, the season also lasted two weeks longer.

Despite the seemingly sunny outlook that longer growing seasons could mean better harvests for Western Slope fruit growers, late frosts seem to throw a cloud in the mix. The well-established strategies for dealing with frost suggest that farmers have been experiencing them for a long time.

“A cold snap is pretty much a given every spring. You can plan on it,” Godin said.

Though little research has been done on the effects of late frosts and increasing season lengths on fruit trees in the North Fork Valley, Dr. David Inouye, an ecologist at the University of Maryland, has shown that lengthening growing seasons are causing flowers in Colorado’s Rocky Mountains to mature earlier, and that when that late frost does come around, the wildflowers are more likely to be at that critical bud stage. But overall, it’s still unclear whether the longer season will help or hurt fruit growers—Godin says more research is needed. 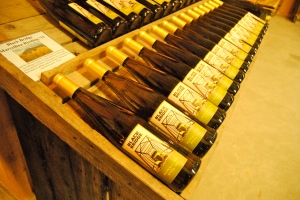 To diversify, Bradley makes wine from his small vineyard

Godin is quick to explain that he has only looked at season length data for the small town of Hotchkiss, and even that might not be a fine enough scale of analysis, because among Western Slope fruit growers, it’s all about the micro-climates. For example, Austin’s trees on the mesa bloom four days later than the trees in Delicious Orchards in the valley just down the hill, and that little difference in bud break can mean everything when the frost hits.

“When someone asks, what’s the temperature like in Paonia, I say ‘well, where at?’” Austin said.

The farmers we spoke with, for the most part, aren’t attributing the longer growing season to climate change, and considering they wake up to temperature alarm clocks, there’s no denying they’re pretty connected to the weather. Austin, who has lived in Paonia for over four decades, remembers each one distinctly. He says the ’70s were cold with high snowpack. The ’80s were warmer, and that’s when everyone started talking about global warming. Then, he says, things cooled off in the ’00s.

“The one consistent thing is that it’s always different,” he said.

When the snowmelt trickles

Looking forward, research suggests Colorado’s Western Slope will receive less snowpack and experience more drought as the climate changes. The state has already been in a drought for over two years. Extended drought would cause severe problems for fruit growers. During a five-year drought that lasted from 1998 through 2003, the water ran dangerously low, to the point where farmers were picking and discarding unripe, water-thirsty fruit to save the parched trees.

“I think we’re going to start seeing some downside effects [of climate change]—it’ll get too hot. Irrigation water shortages will likely continue as temperatures keep rising in our desert climate,” Godin said.

But if anyone knows that the show must go on, even in a bad season, it’s farmers. That’s why Cherry Days, the annual 4th of July weekend festival that takes place in Paonia, was a smashing success this year, even though most of the cherries were shipped in from Washington State. And thanks to some careful diversification, farmers are looking forward to some good peaches come August.

2 thoughts on “Colorado Fruit Growers Harness Wind, Water, and Fire to Save Harvest”