Brad Lancaster describes the strip of vegetation beside the sidewalk outside his Tucson, Arizona home as “an orchard and a pharmacy.” The desert ironwood tree has peanut flavored seeds and blooms that make a delicious salad garnish. Creosote is good for athlete’s foot. Chuparosa has a red flower that tastes like cucumber. The barrel cactus’s yellow fruit can be used for chutneys or hair conditioner. Mesquite pods make nutritious flour. And many more. Depending on the season, Lancaster gets 10 to 20 percent of his food from this sidewalk garden, and another in his yard.

Lancaster grew up in the desert outside Tucson. He and his brother often played in the sand until, one day, the suburbs of nearby Tucson engulfed his neighborhood and there was no more desert to play in. Now, he’s trying to integrate a desert playground into the city.

“We’re trying to bring the desert into the urban core. Not a survival desert or desert of scarcity, but a thrival desert of abundance,” he said.

By we, Lancaster means the Dunbar Spring neighborhood, home to about 900 people dispersed over six urban blocks in Tucson. Through rainwater harvesting, Dunbar Spring is reaping sustenance—both caloric and communal—from a landscape that others see as stingy.

On July 11 of this year, Tucson ended a heat wave during with 39 consecutive days reached over 100°F, tying years 2005 and 1987 for the record. The highest temperature of 112°F was hit on mid-afternoon on June 29—just shy of being able to fry an egg on the sidewalk. 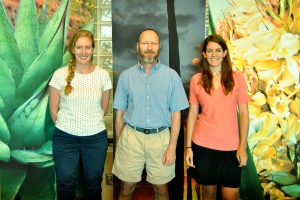 Gregg Garfin, the Deputy Director of the University of Arizona’s Institute of the Environment and a co-investigator on the Climate Assessment for the Southwest (CLIMAS) project, has been thinking a lot about heat extremes in Tucson. His most recent study, not yet published, projects that for the 2041-2070 period, Tucson will have on average 34 more days over 100°F—25 of those days will be over 110°F. (Currently, the average number of days per year over 100°F is around 60.)

When it comes to drought in Arizona, climatologists are finding that the ‘new normal’ of the future could be similar to the extremes of the past.

“The paleoclimate records show astonishingly long and severe droughts,” Garfin, who launched his career in paleoclimatology (the study of historical global climate changes), said. Those records could now help Tucson “to be prepared for [drought] that may be beyond the realm of what we’ve experienced.”

Over the last half century, average annual precipitation has decreased in most of Arizona. Tucson only gets about 12 inches of rain a year to begin with, most of it coming in the summer monsoon season. With climate change, annual precipitation is projected to decline further in the Southwest U.S., falling in more intense bursts. 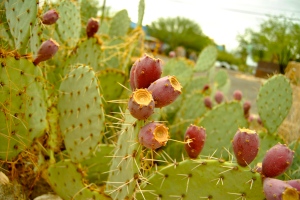 And ‘adaptation’ is certainly the name of the rainwater harvesters’ game—though they may not call it that.

Lancaster, tall with a head of unruly red hair that he keeps tamed under a wide-brim straw gardener’s hat, is the ultimate rainwater harvester. In fact, he literally wrote the book on the topic. In addition to his bountiful gardens, Lancaster captures rain for his outdoor shower and his drinking water. The washing machine that he shares with his neighbors sends gray water to different desert trees around Lancaster’s yard. 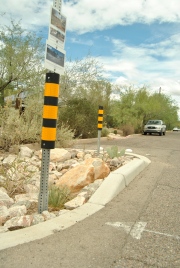 And it all began one lazy Sunday. Brad Lancaster, his brother, and a few friends illegally cut out a strip of the curb in front of the Lancaster’s house at 9th Avenue and University Boulevard. They wanted to see if they could capture rainwater runoff from the street and funnel it into their curbside garden. When it worked, they went to the City of Tucson to create a permit so that their neighbors could (legally) cut their curbs too.

The City not only got on board, they also improved the design by requiring a two-foot minimum pedestrian platform of sidewalk next to the cut curb, allowing people to stand next to the vegetation without sinking into the mulch. The city permit costs $45, but with the help of a $500,000 Pima County Reinvestment Grant, $100,000 of which went to water harvesting, and many Dunbar Spring residents now have water-harvesting curb cutouts and streetside basins. On some blocks, as many as 80 percent of residents now harvest water this way.

Dunbar Spring now harvests two acre-feet of rainwater (enough to cover two acres with a foot of water) per year. The curbside strategies are simple, but they represent a paradigm shift in how Dunbar Spring deals with rainwater.

80 percent of residents on this block now have curb cutouts that bring street runoff to sidewalk plants.

“It’s insane that we’re spending all these resources bringing inferior water to this place when we have a much higher quality, salt-free rainwater falling from the sky,” Lancaster said. “What I find exciting about the potential [of rainwater harvesting] is the shift from conventional infrastructure—which is all about the drainage of resources—to harvesting and enhancing resources.

Many ‘whys’ to rainwater harvesting

The curb cutouts have many benefits: They reduce flooding, and therefore potholes. They help support a higher density of trees on the sidewalk, increasing shade canopy. They encourage people to get to know their neighbors, perhaps by trading prickly pear cacti fruit recipes. 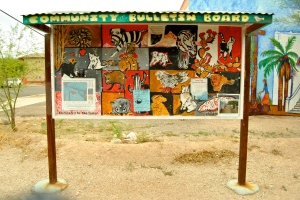 A community bulletin board in Dunbar Spring includes a watershed map

“When we’re harvesting our fruit, we’re out here. So we’re getting to know more of our neighbors,” Lancaster said. “So you actually feel like you’re in a community, not just a housing development.”

And, though ‘climate resilience’ is not an explicit motivation for rainwater harvesting, it certainly does make life a little easier for desert plants during particularly dry years. For instance, though Dunbar Spring has received only half their usual rainfall this year, the curbside cutouts double to triple the amount of water running off the streets to plants. So, on some blocks in the neighborhood, it’s as if rainfall is normal.

Ultimately, Dunbar Spring’s rainwater harvesting is about sustaining community. Historically the black neighborhood of Tucson, Dunbar Spring was named after the Dunbar school built in 1918. The school was desegregated in the 1950s, and Dunbar Spring is now very diverse, tittering on the edge of gentrification. Heat and water scarcity weren’t always so much of a struggle. The neighborhood used to be so canopied that old-timers remember walking around barefoot in the shade. Those living just to the west of the Santa Cruz River would even dive into the water open-mouthed to get a taste of watercress along with a drink. 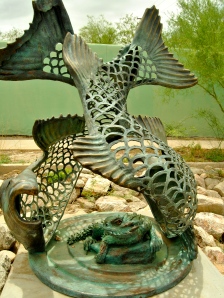 This statue by Tucson artist Joseph Lupiani depicts a horn lizard within a Sonora suckerfish.

Due to water diversions and withdrawals, the Santa Cruz River now runs dry except for after a few big rains. A few blocks from the parched riverbed is a symbolic statue of a horn lizard within a Sonora suckerfish. The horn lizard is so well-adapted to the desert, it harvests rainwater off its back.

“The sculpture is a reminder of what we’ve lost,” Lancaster said.

Lancaster has bigger dreams for the neighborhood. He believes Dunbar Spring can easily harvest 20 times the runoff they’re securing now. The average street in the neighborhood drains a million gallons of water per mile per year, enough to support a tree every 25 feet. By reducing ‘hardscape’ surfaces, less water is lost to runoff and evaporation. Plus, capturing water on-site reduces the need for pumping water from the aquifer, giving natural recharge a chance to catch up to extraction.

Many Dunbar Spring residents are open to trying new rainwater harvesting strategies, but community spirit itself is something that requires regular watering. The Pima County Reinvestment Grant, which provided some important community nourishment through artistic traffic circles that slow cars, a sidewalk chessboard and library, and a neighborhood bulletin board, is now spent. Lancaster was disheartened recently when he saw a neighbor put up a high fence around their property—to him, a sign of withdrawal.

“I think we’ve got a lot of change to go yet,” Lancaster said. “I would like to see the default being that everyone’s harvesting rainwater and growing a lot more food. It’s really about trying to reclaim the commons for use of public land for people.”

More photos from our visit to Dunbar Spring here. We also learned about mesquite harvesting in Tucson. Read the story here.